Emilie Conrad, the founder of Continuum, lived in Los Angeles, California. She is considered a visionary whose work is incorporated by an International audience of professionals from fields such as Rolfing, Zero Balancing, Hellerwork, CranioSacral, Osteopathy, Physical Therapy, Dance, Psychoneuroimmunology, and Physical Fitness. 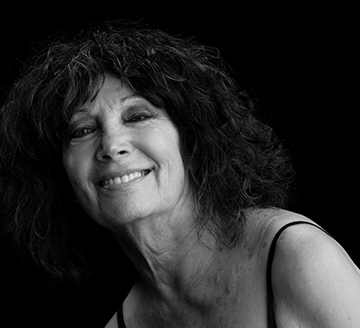 She has received awards for “Movement Teacher” of the year and for her work as a Somatics Pioneer.

Emilie Conrad was born and raised in New York City where she studied ballet and Afro-Haitian dance. Her early influences were Sevilla Fort, Katherine Dunham, Robert Joffrey and Don Farnsworth. Subsequently, she spent five years as a choreographer with a folklore company in Haiti furthering her interest in Haitian dance.

Her love for movement inspired her to discover the essential, primary movements common to all life forms that lie beneath cultural influence. These fundamental movements are a “cosmology” of life, where form is fluidly mutable, dissolving and shaping itself anew.

In 1963 she moved to Los Angeles where she began teaching at the Actors Studio. Her novel approach to movement enriched the performing artist and led to choreographing and directing many plays and performance works. Her choreography has been seen at: the Japan America Theatre, John Anson Ford, Wilshire Ebell Theatre, Theatre West, Pasadena Art Museum, Highways, UCLA, Actors Studio West. She has developed the art of performance.

In 1974, she pioneered a protocol for spinal cord injury. From 1974 to 1979, Emilie was Movement Specialist in a research study conducted by Dr. Valerie Hunt at UCLA. This groundbreaking study demonstrated that fluid, primary movement is essential in our ability to innovate. Enhancing these fundamental movements has a potential to create a rich intrinsic environment that brings forth new insights in our understanding of the human body and its potential to create alternate systems.

Emilie’s capacity for innovation has become an inspiration to the field of Somatics, movement education, and physical fitness. She has originated a dynamic workout that strengthens by incorporating multiple angles in gravity to facilitate developing diverse muscular and skeletal relationships. In support of this she created equipment such as the Explore Board and the Flight Plan.

One of Emilie’s contributions is her revolutionary concept of  “The Three Anatomies”.  Here she defines three distinct tissue structures as the cultural, primordial, and cosmic anatomies.  Emilie tells us: “becoming aware of the primordial-cosmic flows of information can be instrumental in diffusing our cultural inhibitors, helping us to move beyond our stifling adaptive patterns, ultimately becoming a resource for health and creativity.”

Emilie is the author of “Life on Land” published by North Atlantic Press.